Saw natural avalanche debris below the cliffs on the NE face of Fan from the resort. Tons of wind loading the last few days. Light wasn't good to get a clear picture. Looked like a few different smaller avalanches but could have gone all at once.

Immediately after this slide, I saw what I assume was skier triggered, slide of similar size a little further down the bowl with crown drifting in. Beacon check of debris produced no signal, barely deep enough to bury someone.

On a northeast facing slope at 9,100' near the ridge that divides middle and beehive basins my party dug a pit that was 65 centimeters deep, the extended column test had a score of ECTN 19 at 37cm. The layer at 37cm from ground appeared to be 5cm of sugary fist density snow sandwiched between layers of 4finger density snow.

We observed small shooting cracks up to 6 inches while traveling through freshly wind loaded snow near ridgelines.

Triggered a small(d1r1?) wind slab off the bridger chair in bounds at bridger. Little skiers right of bumble chute on the roll over skiers left of bronco. NE face. Rollover around 35 degrees mellowing throughout the run. The face had tracks from earlier today before i triggered the slide. I was able to self arrest and stop myself before being carried. The crown was around 20-25 ft wide and the slide ran roughly 100ft downhill before stopping. Both myself and my partner skied away unharmed. Tons of people touring up bridger today, many without backpacks/ beacon shovel probe.

Toured up to the NE shoulder on Mt. Blackmore yesterday. Winds were strong and variable, but mostly gusting from the S-SW. A lot of snow was moving around, skin tracks were filled in very quickly, and you could actively see small cornices starting to build on the lee side of the ridge.

On the descent, I intentionally triggered a small wind pocket in one of the chutes in the cliffs near the trail at 8700 ft. I included a video. It was D1 and about 5 inches deep at the crown. I think just a good reminder that even in the trees, the tops of those chutes get wind loaded and can definitely slide. 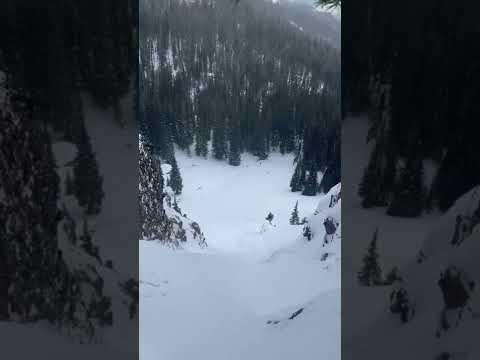 Saw a group of skiers trigger a small wind slab avalanche on an eastern aspect at around 8,300' in the main fork of Hyalite in "Candy Land" just south of the climb Big League Chew at 2:00pm on Saturday (11/26). Crown looked to be around 2" to 1' and 90' wide. The slide ran maybe 100'. No skiers were caught. It was triggered as the first skier traversed out onto the intended ski line from the trees which they skinned up. The fracture extended from the tips of the first skiers skis and ran across the slope and underneath a small cliff band. The group skied out on a slightly lower angle slope adjacent to the slide. My group watched from below an adjacent ski run approximately 300 yards away as the slide happened. We had dug a pit on a similar aspect in the area approximately 30 minutes before the slide and found 85cm of snow with a weak layer at 42-45cm which failed CTs but we couldn't get propagation. (CT22, ECTN21). It looked like this was probably the layer that failed in this slide.

No avalanche activity, cracking or whumphing

No wind today up to 9000’; no evidence of recent wind-drifted snow

No new snow; Snowed s-1 all morning with no real accumulation (trace)

Yesterday toured up Bacon rind on the spur just to the south of the Skillet, dropped west towards Ernie Miller ridge and skied two laps on the N end of the ridge. We travelled back to the car on the same route and skied out the skillet.

No Cracking or Collapsing observed all day

pole probes felt uniform/generally right side up all day

1F zipper crust on the surface of anything solar

Comments: Failure at the new snow interface seemed very spatially dependent.  We had an ECT 11 in another area.

Skied multiple locations along Lionhead Ridge over 3 days, NE to E aspects.  Our observations were in line with the avalanche reports.  New snow was generally 15cm deep and weakly bonded to the existing snowpack.  There was minimal wind transport during this time along the more protected NE aspects along the ridge line, so the snow was not particularly wind loaded or consolidated.  Even so, there was multiple instances of small natural loose snow avalanches on steeper aspects or terrain rollovers.

A. Marienthal
Bridger Range
The Ramp
Snowpits north of Bridger

Toured to the ramp and Bradley's Meadow on 11/25 around noon. Temperature was 45 F and wind was calm. Snow surface was moist 5-10cm deep on most slopes. The snow surface on shady slopes above about 8,000' remained dry, despite temperatures above freezing at all elevations.

I dug one pit at the top of Bradley's Meadow where it is moderately wind-loaded on the south end, east aspect at 7,800', and one pit halfway up the Ramp on northeast aspect at 8,200'. Both were just over 2 feet deep. I had ECTNs below the recent storm/wind-drifted snow, on a layer of small (0.5-1mm) faceted crystals. Lower half of snowpack had layers of 1-2mm facets, but supportable and generally stable for now.

Skied out to the head of beehive basin for a fitness / recon tour. Made it about halfway up the head wall to the pass between Beehive and the Mirror lake basin. At lower aspects boot top powder with surface hoar predominated with patches of breakable sun crust. Higher in the basin (2800-2900m) south facing aspects were thin, windblown, and sun effected. Ski conditions were completely breakable sun crust by apx 5pm. Lots of moving snow on south facing aspects. I did not dig a pit. See attached photos. In the panorama, most of the chutes to the right of the arrow (4th of July couloir) had slid, it looked like it was mostly limited releases from sun warmed rocks. I did not see any natural slides to the left of the arrow.

Backside skiing was already getting heavy just after 10, reasonably heavily trafficked since last storm, someone ski cut just below cornice with no movement.

Well developed surface hoar was widespread this morning near Cooke City. The strong sun burned it off on aspects that received sun, but it was preserved in shaded areas. Strong south winds picked up in the afternoon in the Sheep creek drainage. We dug two pits (ectx both times) and a shovel shear test just below sunset peak, and found stable snow.

Just wanted to share a few photos and videos of how windy it was up at Bridger today. The strongest winds/gusts were mostly mid-mountain and were blowing from the North-Northwest. Lots of snow moving around and stripping of snow surfaces as the videos show.

Hey guys, wanted to share about a small avalanche I set off today. Snow was getting warm on my way up 4th of July couloir (pinwheels coming off lookers right wall started around 11:30) top half took a long time due to deep snow so I was suspicious of the pinch. Ski cut it during the descent (12:30p) and set off a wet slide (point release) that picked up quite a bit of steam as it came out the bottom. Big enough to injure/bury a skier.

Moderate to strong wind at mid mountain level with visible transport across and down slope in many locations. Skiing conditions deteriorating in wind affected zones.

From IG Message: "I read the avalanche report this morning and felt comfortable skiing. we made a plan to ski Bradley’s Meadows but ended up skiing Bridger Gully to the 3 Bears after discussion and feeling comfortable and confident in the snowpack. we did not experience any whoompfing or have any other concerns on the approach.

The bottom of Bridger Gully to 3 Bears is where I triggered the avalanche. My partner dropped in first and skied safely out of the potential slide area. I followed up and on my first turn, triggered the slide. To me it looked like it was around 8” deep and was around 15’ wide at the crown.

We skied out and talked to other skiers about our experience."

Saw a small avalanche on a steep roll over below the nose. Looked like it could've been human triggered.

Strong to moderate winds at middle elevations trending from the north but also swirling quite a bit. Active windloading observed on ESE slope at 7800ft

Wind was moderate, gusting strong out of the north and west and transporting snow. There were 3-4” on lower mountain and 7-8” new up high. Snowpack is 1-2’ deep. Prior to this storm, snow close to the surface had turned to small (1-1.5mm) facets during previous cold weather, capped by a thin crust (wind or sun) on many slopes.